Hyderabad: Vice Chairman B Vinod Kumar of the State Planning Board on Sunday revealed the lies being spread by BJP leaders about the alleged failure of TS CM KCR to address river water disputes between Telangana State and Andhra Pradesh. "KCR wrote to PM Modi and then Irrigation Ministers Uma Bharathi and Nitin Gadkari, asking them to set up a tribunal to address pending issues of the newborn State with AP, Maharashtra and Karnataka under the provisions of Section 3 of the Inter States River Water Disputes Act of 1956," Vinod Kumar told mediapersons here.  In addition, within six weeks of the creation of Telangana State on July 14, 2014, the then Irrigation Minister T Harish Rao also wrote a letter to Uma Bharathi urging her to help find a solution to the pending problems of water sharing between the two States, adding: "On the same day, SK Joshi, Principal Secretary of Irrigation, also sent a note to the Secretary of Union Irrigation."

Pointing out that the Centre must resolve all inter-State water conflicts as solutions to such problems cannot be reached at state level, the chairman of the TSPB fell heavily on the leaders of the State BJP who blamed the Telangana government for the AP's pending river water issues. "A final solution to the problems facing the Telugu States has been deferred by the Central Government," he said, adding that Harish Rao, Chief Secretary and Principal Secretary for Irrigation, wrote several letters on the subject to the Centre.

"TRS MPs raised the issue during the 16th Lok Sabha and placed pressure upon Uma Bharathi and Gadkari. Telangana's claims were widely covered in the media at that time," he said. He recalled that Maharashtra and Karnataka MPs created a ruckus in the House that opposed the point of view of Telangana and eventually forced the Minister to withdraw from seeking a solution. "When no action was taken by the government of the Union pursuant to section 3, the government of Telangana approached the Apex court. Still, there has been no response at the Centre from the BJP government," said Vinod Kumar. 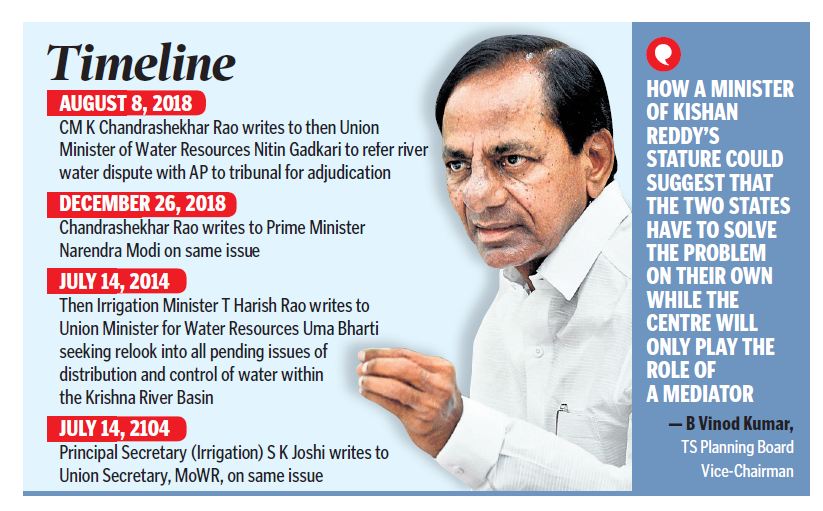 "While these are the facts and the Centre is very responsible for solving the problem between the two States, it is deplorable that Union Minister G Kishan Reddy and BJP State President Bandi Sanjay Kumar are alleging inaction on the part of the TRS government," he said. He wondered how the stature of a Minister of Kishan Reddy could mean that the two States have to solve the problem on their own while the Centre is only going to play a mediator role. KCR had always sought an amicable and eternal solution to water conflicts with its neighbours, Vinod Kumar said. " We must also remember that even now, owing to the rude and inconvenient behaviour of the earlier governments, many river water problems remain unresolved. But our CM believes in talks with his colleagues around the table," he said.

He urged the leaders of the BJP to take the initiative and impress the Centre, in the greater interest of the people of the States, to resolve the pending water disputes between the two States. He also suggested that they give orders to the Brijesh Kumar Tribunal to allocate Krishna water at the earliest in a pleasant manner to both the Telugu States.