Hyderabad: In India, there are few cities that have the charm of the old world with a blend of modernity. The city has another structure to be proud of, with the addition of iconic structures such as Hi-Tec City and Cyber Towers, and now with the Durgam Cheruvu cable bridge.

The cable-stayed bridge on Durgam Cheruvu was formally thrown open to the public by Municipal Administration and Urban Development Minister KTR here on Friday in one of the most anticipated events for the city. The bridge, which has already become one of the city's hotspots, made its official entry into the record books as the longest span of concrete deck extra-dosed cable-stayed bridge in the world, with the rain gods marking the event with a steady spell of rain. KTR, who rode along the bridge in his convoy, tweeted earlier that another jewel had been added to the City of Pearls. Under the Strategic Road Development Programme, the 238-metre-long bridge was designed at a cost of Rs 180 crore and is hailed as an engineering marvel across the world.

KTR also inaugurated the elevated 4-lane corridor to Durgam Cheruvu from Road No.45. To facilitate the free flow of traffic between Hitec City, Madhapur and Gachibowli, the elevated corridor, 1,740 metres long and 16.60 metres wide, connects to the cable-stayed bridge. The Minister also launched two boats to visit Durgam Cheruvu for tourists. The event had many people gathered near the structure to witness the inaugural function of what is also the first hanging bridge in the city, with a spectacular display of fireworks after the inauguration. G Kishan Reddy, Minister of State for Home Affairs, V Srinivas Goud, Sabitha Indra Reddy, T Srinivas Yadav, Mayor B Rammohan and other senior officials were in attendance. 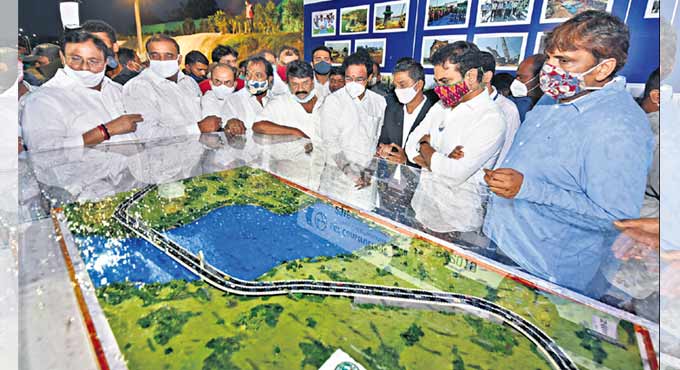 The Durgam Cheruvu cable bridge has many characteristics, apart from aesthetics, construction, architectural lighting and other elements. The work at Durgam Cheruvu was done at a much quicker rate, unlike other cable bridges in the region. In just two days, one segment was installed, while the same was completed in Panjim in three and a half days, Kolkata in five days and Mumbai in eight days. Similarly, in those projects, the construction of stay cables took two and a half to five days, as opposed to just 28 hours at Durgam Cheruvu. The officials of the GHMC said that the focus was on quality and reliability during the completion of the project.

Samples of the cables used for the bridge were sent for a fatigue test to a special laboratory in Germany to determine the behaviour of the materials under different conditions. A few L&T engineers have visited Germany for the special checks that are carried out before the final testing is carried out in order to ensure high-quality accuracy in the protection of the structure. Mandatory load tests were performed on the bridge in the final lap to verify the load bearing capacity and other aspects. The load test was performed in an incremental manner by imposing 1,080 metric tons of load on the deck.

For 24 hours, as many as 36 trucks with 10 tyres, each with a size of 30 metric tonnes, were parked on the structure. Prior to throwing it open to the traffic, this was the final test carried out.